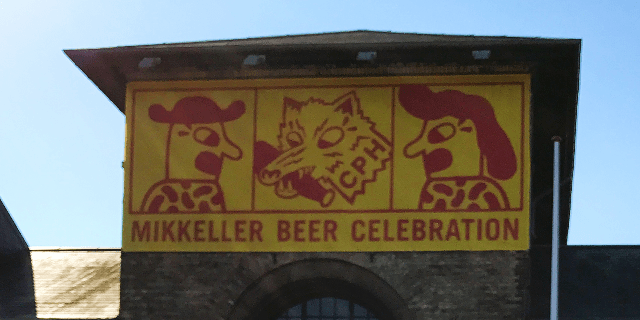 As almost shameful as it is to admit in our position – this was our first trip to the Mikkeller Beer Celebration Copenhagen (previously known as Copenhagen Beer Celebration, just to slightly confuse matters with your social media hashtags). Regardless – to say we were excited was an understatement. Whilst the beer festival itself was the main event, with so many brewers in town, the city was ripe for tap takeover events and other fun little soirées…..of course we indulged.

We arrived on Wednesday and headed straight to BRUS – the shop/bar/restaurant owned and run by the marvelous To Øl. We hooked up with the lovely and welcoming Emil from To Øl who handles a variety of jobs as well as their webstore. He gave us a tour of the brewery before we settled down for a few drinks and some food – the Charlie Black Vanilla and Cacao Edition stout and ‘Was Ist Los Mit Dir?’, a citrus gose, going down especially well. After dinner we ventured over to the Mikkeller and Friends bar where a Cloudwater tap takeover was in full swing, whilst on the other side of the bar a shedload of Cycle Brewing beers were on…..this bar does have 40+ taps after all! We had a Cloudwater Coconut Sour (which none of us knew even existed prior to seeing it here), which was amazing, and a Cycle Brewing Christmas Stout which was like Christmas pudding and mince pies in a stout – therefore it was mindblowing.

Cans of Heady Topper by The Alchemist for sale? Check

On Thursday we visited the Mikkeller Bottle Shop in Torvehallerne, Copenhagen’s biggest market for high-end food and drink. Damage? Other Half Brewing cans, Speedway Stout Vietnamese Edition in a can, Almanac Brewing Coffee Barbary Coast (imperial stout with coffee, dandelion cacao nibs, chili pepper, oak and sea salt!) and a couple of Mikkeller San Diego can releases…..it suddenly dawned that this might not be the cheapest trip ever. Following this we headed over to Mikkeller Baghaven – their barrelroom-come-bar in an industrial part of the outskirts of Copenhagen. Cans of Heady Topper by The Alchemist for sale? Check. Founders Kentucky Bourbon Stout on tap? Check. A good time had by all? Check. We rounded out the day with a truly spectacular dinner at Amass – where we discovered BRAW beers – a wonderful session IPA and incredible Black IPA were duly sunk – scope these dudes out!

Friday morning was the main event for us – as we had tickets solely for the Friday morning session of Mikkeller Beer Celebration. As we had ‘silver’ tickets – this enabled us entry at 9.40am (!), twenty minutes prior to regular ticket holders. Yes we probably are insane but this was very, very useful in being able to sample some of the more scarce and exciting breweries and beers before it got too crowded. To list all the beers we sampled would be impossible, but here are some notable highlights for us: Omnipollo Bianca Mango Lassi Gose (served soft style, ie with a sort of sortbet, perhaps, on the top) and Lorelei Maple Coconut Toast Imperial Porter served by brewer Henok Fentie himself; Angry Chair Brewing with their Strawberry Cream Berliner Weisse (exactly what it says on the tin, with a distinct tartness, wonderful stuff); Browar Artezan (Poland) with their tropical IPA ‘Dodo’, Flying Couch (Denmark) with their Yuzu Raspberry Berliner, TRVE Brewing – Departure of Consciousness (mixture culture pale ale with peaches) and Voodoo Brewing’s Imperial Breakfast Stout. Unreal. There were many others too of course. Too many to name in all honesty. And some probably forgotten about in a haze of destroying our tastebuds, liver and brains.

Afterwards we headed to the amazing Warpigs for outrageous BBQ and (er) more beer. Alex woefully ducked out to return to our Airbnb shortly afterwards (alcohol is tasty, but bad). It’s pretty hard to judge how much you’ve drank when you’re knocking back approx. 50ml samples endlessly….oops. The rest of us headed a few doors down to the outstanding Fermentoren bar. Prairie Ales’ Bomb on tap? Yes please.

Saturday was somewhat of a day of sightseeing and tourism, but we still managed to pop back to BRUS and take in the BRUS/To Øl/Fonta Flora beetroot stout (wonderfully balanced, earthy and in terms of colour it basically looked like blood!) and the truly awesome Solbær Weisse –a creamy, easy going blackcurrant Berliner Weisse. We rounded things off with dinner at Ramen to Biiru – the ramen here really is top-notch, and to have it accompanied by Mikkellers Yuzu Berliner Weisse cut through the fat of the ramen broth perfectly.

An amazing trip that we now hope to make an annual part of our calendar. All in the name of research of course. Alex will need to learn to judge his alcohol intake at the festival better, or simply not be such a light weight. It was all bloomin’ worth it though! 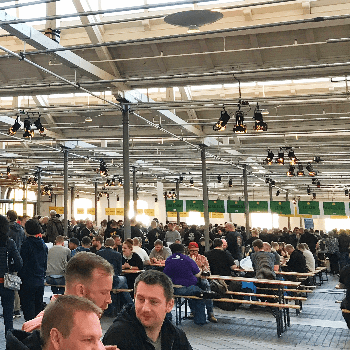 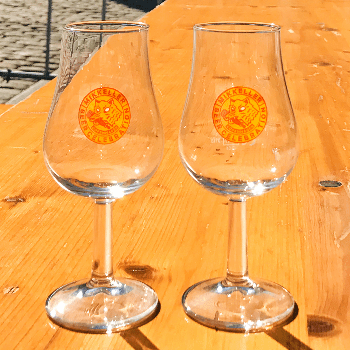