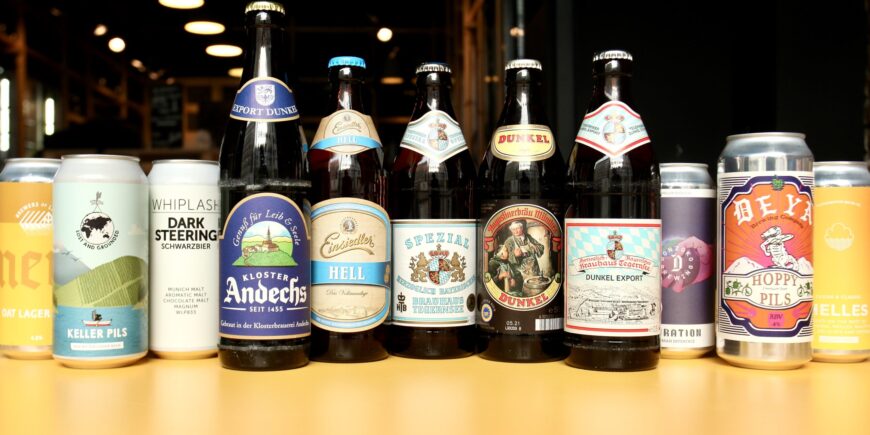 OUR BRIEF GUIDE TO THE WONDERFUL WORLD OF LAGER

The humble lager is a brilliant and diverse beer that offers something to just about everyone, despite the assumption that the term might be a dirty word within the craft beer scene. It deserves a lot more respect and love than it currently receives. We adore it, so here’s our brief guide to this wonderful, varied beer style.

Lagern (German): to store. This simple German verb is the very soul of what a great lager is, and is often the downfall of many terrible ones. The lagering process from which the style takes its name is a period of six to twelve weeks, once fermentation has completed, in which the beer is left at a cold temperature to mature. This time allows the beer to clean itself up by breaking down residual acids and other unwanted chemicals such as dimethyl sulphide and diacetyl (which can respectively leave sweetcorn and butterscotch flavours behind), resulting in that super clean and crisp beer we all adore.

The yeast often used (but not quite in all cases, as we will come to) is also different to that used in ales; Saccharomyces pastorianus is what is known as a bottom-fermenting yeast, meaning it drops to the bottom of the vessel once it’s done its job. This strain appears to have evolved to cope with the low temperatures that German beer was traditionally subjected to as it was stored in cold subterranean caves before the invention of refrigeration.

Of course, we can’t talk about lager without mentioning Germany’s Reinheitsgebot, or purity laws. 1516 is the year usually ascribed to the regulations when a unified Bavaria formally adopted them, although many versions existed beforehand; it was not applied to the whole of Germany until 1906. The most recognised section is the prescription of ingredients used in beer: barley, hops, and water. This 1516 version does not include yeast either, as very little was known at the time as to the nature of the organism and its fermentation process. The law also sets out the maximum price of the beer, depending on the time of the year.

Although generally just referred to as “lager”, there are in fact many different styles that have been developed, often tied to the geographical locations in which they came to prominence. We cover fifteen (yes fifteen) of them here. Go forth, explore, and when you’re ready to pick up a few cans or bottles, you can browse our full range of lagers on our online shop or of course just pop into our Brixton or Putney stores. Enjoy!

Taking its name from the city of Plzeň, Pilsner is what most people in this country brew and drink as lager. It is characterised by orchard flavours, both crisp apples and a light earthiness, with a high bitterness in the finish. There are differences between the Czech versions and German (where it is usually abbreviated to just “pils”), as the latter tends to be even lighter in colour, with more floral tones coming through on the palate. Our biggest selling Pilsner, and for good reason, is Lost & Grounded’s Keller Pils.

The pride of Germany’s Bavaria region, centred on Munich, helles lagers rely more on the malt for their flavour profile. Slightly creamier than a pilsner, a mild bready sweetness mingles with the aroma of freshly cut grass and even a hint of light spice from the local hops to create a beautifully refreshing and incredibly moreish beer. When done correctly, this is a study in refinement and balance. Donzoko are a great UK brewery known for their lagers with Northern Helles at the head of their range.

From the German for “cellar”, this has come to mean an unpasteurised and unfiltered beer. Due to the more perishable nature of the beer having forgone these processes, it is traditionally served from the brewery’s cellar to be as fresh as possible. The upside is that more of the goodness is left in, meaning a brighter, tastier lager. Braybrooke’s Keller Larger is a must try here!

The “March beer” was traditionally brewed during its eponymous month, as those 16th century laws dictated that no brewing was allowed from St George’s Day until Michaelmas at the end of September. As a result, these beers are strong, darker (primarily ending up an amber colour), and more highly hopped to allow them to survive longer in the cellars during the barren summer months.

The grand Oktoberfest in Munich, where only the six breweries located within the city’s limits are allowed to serve, started as a wedding celebration for the crown prince in 1810, where Märzen was the beer of choice. It remained so for many decades, until the rise of paler lagers instigated a change. A slow evolution over the years has continued with the theme of a stronger ABV and a larger focus on hops, and the pale version now served has become known as Oktoberfestbier, or simply Festbier for those brewing it outside of the city.

Originally a bigger, sweeter lager that appeared brown in colour, with a slightly more roasted or caramel-tinged flavour emerging from the darker malts used. Nowadays the term has become a byword for a stronger version, particularly with the popularity of the heller bock (or maibock). Andechs make a brilliant bock. The doppelbock and eisbock take this even further; the latter using the technique of ice distillation – chilling the beer so that the water, but not alcohol, begins freezing, removing the ice to increase the concentration.

A style that is far less well defined or even accepted. As the name suggests, it originates from the city of Dortmund, and is a halfway house between helles and pilsner. Whilst still relying primarily on the malt for its defining features – much like helles – it’s more heavily hopped and bittered, albeit not to the same extent as a pilsner. They generally have a higher alcohol content, between 5% and 6%, which has led some breweries to merely add the term Export to their beers that creep into this bracket. Germany’s Tegneseer make ‘Max I Joseph’, a simply perfect beer.

Native to the city of Düsseldorf, this copper-coloured beer actually employs a top-fermenting ale yeast, albeit a special one that works best at a temperature between those usually associated with each type (ten degrees for lager, and twenty for most ale). The beer then goes through the lagering process, resulting in a very clean and mellow, albeit rather earthier, flavour more readily associated with lagers. London’s Orbit Brewing are fond of German beer styles and have made a few great Altbiers, check out their Sticke Alt if you can.

Köln/Cologne has fiercely fought to protect its unique variant, the Kölsch, to the point it is officially recognised with the Protected Geographical Indication mark. Also brewed with an ale yeast and fermenting close to twenty degrees, it then similarly goes through the lagering process. The product is a pale beer that’s characterised by an amplified level of fruity esters produced, combined with an increased use of hops.

A style now deeply associated with Bamberg, the last stronghold in the process of drying malt over open fires that imparts that distinctive smoky character to the beer. The massively phenolic aroma and taste are reminiscent of campfires and bacon, and invokes either complete adoration or utter disgust. The rauchbier can be adapted to many styles, so rather than having a prescriptive set of indicators instead demonstrates the use of the smoked malt in the recipe. Although not frequently available in the UK, you should check out Schlenkerla for incredible examples of this style. They even have a spirit distilled from the smoked beer!

Helles’ dark, brooding brother; the addition of malt that has been kilned to a high temperature imparts both the dark brown colour, and produces a slightly more roasted coffee taste without compromising on that bright freshness that is so desirable in any lager. They’ve been mentioned once already but Tegneseer should be your go-to brewery for incredible lagers and their Dunkel is testament to that.

Even darker, appropriately enough as the name translates to black beer, this is the pils’ equivalent of the dunkel. Combining both the crisp, sharp dryness of the pils with the dark chocolates tone of roasted malts, the bitterness is dialled back somewhat to maintain a well-balanced and very drinkable dark beer. Whiplash’s Dark Steering is an incredible Schwarzbier, it feels indulgent and refreshing all at once.

Closely related to the helles from Munich, the Vienna lager combines the bready sweetness from lightly kilned malts with a greater hop bitterness than its German cousin. This style has largely fallen out of favour in recent times as consumers tend to gravitate more towards either the maltiness of helles or the bitterness of pilsner.

A product of the Californian Gold Rush, this is the one style here that does not go through the lagering process. Instead, it uses lager yeast but ferments at a higher temperature, historically as a result of the lack of technology in the Wild West. The result is a beer that has a crispness from the yeast, combined with plenty of fruity flavours as a result of both the higher temperatures and lack of maturation time. Our neighbours in Wandsworth, Belleville have a core lager in this style.

After the success of imperial stouts spread throughout the Baltic, many local brewers started producing their own. The discovery and understanding of lager yeast that followed led to an obvious combination of the two, as those operating in colder climbs could reduce costs by fermenting their beers with a yeast more suited to their home environment. The Baltic Porter retains the elevated alcohol content, whilst tasting dry and bitter, akin to a good quality dark chocolate. The Kernel released their first Baltic Porter in 2021 and as you’d expect from London’s best brewery, it’s a dream!