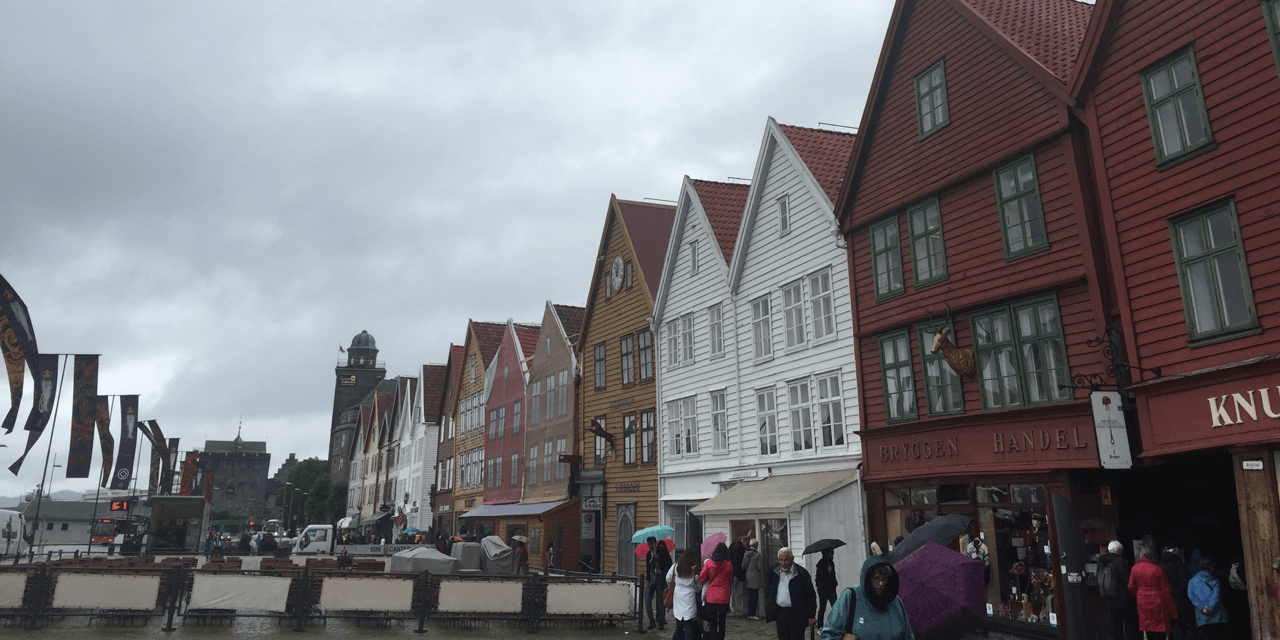 Most people know all about Norway’s strict off-license alcohol laws and high levels of taxation. Incredibly – this has in no(r)way deterred some incredible beers coming out of the country’s many craft breweries. Even Bergen airport duty-free is dominated by bottled offerings from Nøgne Ø, 7 Fjell, Kinn, Voss and Haand. I personally can’t recall a similar situation happening in any other airport. So yeah – there’s a distinct contrast between the countries alcohol laws and the determination of its breweries to succeed, something which is being supported far and wide within the country, beyond the usual or obvious craft beer locations.

The beer scene is somewhat less dour than the weather…

Bergen itself is a small city that flits between the old town (Bryggen) and more modern, and somewhat less remarkable, architecture. It also rains a lot. The beer scene is somewhat less dour than the weather, with (purportedly) Norway’s best beer bar here, in the form of Henrik Øl Og Vinstove. With over 50 beers on tap, it’s hard to argue. A vast selection of all styles with a strong emphasis on Norwegian breweries (naturally) and some interesting international selections thrown in for good measure. We went for a Dark Force by HaandBryggeriet – a wheat imperial stout. Possessing distinct smokey and bacon notes, without being too overbearing for the style, this was a treat.

Our travels also took us to both Pingvinen and Naboen – casual bars with no airs or graces about themselves, that stocked a wide variety of great Norwegian beer by many of the breweries already mentioned. Mention here needs to go to the Rundemanen Rye Stout by 7 Fjell which was on tap at Naboen. I’m pretty sure this was my first rye stout – and it flowed wonderfully from the initial roasted, spicey, chocolatey notes through to an almost sour bitterness on the finish. We also tucked into the amusingly named Titty Barry – a collaboration between London’s own Brew By Numbers and Voss – a delicious sour pale ale with lingonberries. You couldn’t get more Scandinavian if you tried. Finally during this session we tried Oregonian, an American Pale Ale also by Voss, that is ultra cloudy and yeasty – giving an almost sour cheese taste (in the best way possible, we promise!), amongst a pleasing balance of hop bitterness and overall sweetness. It brings to mind cooked apricots in sour cream or crème fraiche, which surely can never be a bad thing.

It’s been great to (briefly) have the opportunity to get even further under the skin of the Norwegian craft beer scene in Bergen. Something that we hope we can ably reflect instore.